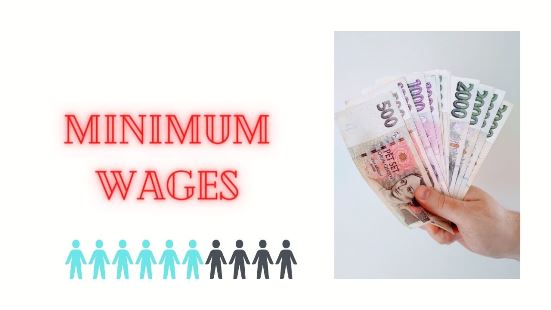 What are Minimum Wages?

The minimum Wage is the lowest remuneration that employers need to pay their employees for their work whether they are skilled or unskilled.

The Minimum Wages are decided by the Appropriate Government (State Government or Central Government) which the employer needs to follow and pay the remuneration accordingly. Every state has its own authority to decide the minimum wage for the worker.

The Minimum Wages of all states are different from one to another. It is revised every six months.

Why Did The Minimum Wages Act Come into Force?

Employers use to exploit the workers. By taking advantage of the condition of the workers, they force them to work at low wages.

The minimum Wages Act came into force to protect the workers against exploitation and undue low pay.

When Did The Minimum Wages Act Come into Force in India?

The Labor Inquiry Committee appointed by the Government of India in 1944 studied the wages and earnings of workers in various industries of the country and told that the rates of wages are very low in almost all industries.

The committee felt that until that time, even in the country’s main industries, proper efforts were not made to improve the wages of the workers.

The question of legally fixing wages in some industries and employment in the country was discussed in 1943 and 1944 in the Standing Labor Committee and the Indian Labor Conference. Both the committee and the convention recommended fixing the rates of minimum wages under the law in some employments and the provision of a wage fixation plant for this.

Keeping these recommendations in mind, the Government of India enacted the Minimum Wages Act in 1948, which came into force in the country in the same year.

Some amendments have also been made to the Act from time to time.

The Minimum Wages Act 1948 is an Act of Parliament concerning Indian labour law that sets the minimum wages that must be paid to skilled and unskilled labour.

In the Central sphere, the Act is enforced through the Central Industrial Relation Machinery (CIRM). CIRM is an attached office of the Ministry of Labour and is also known as the Chief Labour Commissioner (Central) Organisation. The CIRM is headed by the Chief Labour Commissioner (Central). While the State Industrial Relations Machinery ensures the enforcement of the Act at the State Level.

Some Important Definitions Under This Act

Child: Child means a person who has not completed his 14th year of age.

Adult: Adult means a person who has completed his 18th year of age.

Employee: Employee means any person who is employed to do any work, skilled or unskilled, manual or clerical, in scheduled employment in respect of which minimum rates of wages have been fixed. But does not include any member of the Armed Forces.

Wages: Wages mean all remuneration capable of being expressed in terms of money. But does not include-

The appropriate Government shall:

The appropriate Government may refrain from fixing minimum rates of wages in respect of any scheduled employment in which there are less than 1000 employees in the whole State.

The appropriate Government may fix-

The appropriate Government may fix-

For the purpose of fixing minimum rates of wages, the appropriate Government shall either-

After considering the advice of the committee and all representations received by it before the date specified, the appropriate Government shall fix/revise the minimum rates of wages in respect of each scheduled employment. It shall come into force on the expiry of 3 months from the date of its issue.

The appropriate Government shall appoint an “Advisory Board” for advising the Government generally in the matter of fixing and revising minimum rates of wages, and co-ordination the work of committees and sub-committees.

The Central Government shall appoint a “Central Advisory Board” to advise the Central and State Governments in the matters of the fixation and revision of minimum rates of wages and for co-coordinating the work of the “Advisory Board”.

Where an employee, whose minimum rate of wages is fixed, works on any day above the number of hours constituting a normal working day, the employer shall pay him an overtime rate fixed under this Act.

Maintenance of Registers and Records

Every employer shall maintain registers/records of employees by him, the work performed by them, the wage paid to them, the receipts they give, etc.

The appropriate Government may provide for the issue of wage books or wage slips to employees.

The appropriate Government may appoint “Inspectors” for the purpose of this Act.

The appropriate Government may appoint any of the following to the authority to hear and decide all claims arising out of payment of less than the minimum rates of wages:

Where an employee has any claim under this Act, he may present an application within 6 months from the date on which the minimum wages became payable. The application may be admitted beyond 6 months if there is sufficient cause to the satisfaction of the authority. The application may be submitted by the employee himself, or any legal practitioner or any official of a registered trade union authorized, or any Inspector, or any person acting with the permission of the Authority.

When the application is made, the authority shall hear both applicant and employer and then may direct-

If the authority hearing any application, finds that it was either malicious or vexatious, it may direct that a penalty not exceeding Rs.50 be paid to the employer by the person presenting the application.

Every direction of the Authority under this section shall be final.

If employees pay less than the minimum rates of wages fixed then employers could be imprisoned for up to 6 months, or Fine up to Rs.500, or both. Other offenses are punishable with a fine of up to Rs.500.

Power of State Government to add to Schedule: The Appropriate Government can add to either Part of the Schedule any employment in respect of which it is of opinion that minimum rates of wages should be fixed, with notice of 3 months.

You may visit the Official Website for more details.