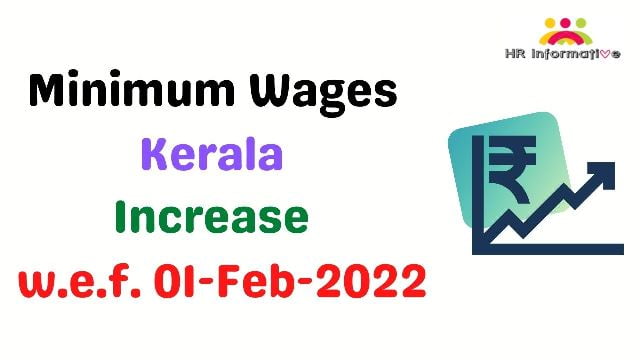 Minimum Wages in Kerala have been increased w.e.f. 01-February-2022 by the State Government. If you are an employee working in any Private Organisation in Kerala, you should know about the Minimum Wages.

Let us know, what are the Minimum Wages of employees working in different categories.

Variable Dearness Allowance (VDA) is revised every month on the basis of the revised CPI (Consumer Price Index) in Kerala. Department of Economics & Statistics has issued the Notification of increased CPI on 04-April-2022 for the month of February 2022.

According to this, Variable Dearness Allowance (VDA) has been increased for the employee who is working under the below category in all Scheduled Employments of Shops and Establishments, Kerala.

Latest Minimum Wages in Kerala w.e.f. 01-February-2022 will be as follows.

For the calculation of 1-day salary (Daily Rates), you have to divide by 26.

Ans : CPI stands for Consumer Price Index. It is an index measuring retail inflation in the economy by collecting the change in prices of most common goods and services used by consumers.

Q : CPI is declared by which department?

Ans : It is declared by the Department of Economics & Statistics.

Q : On what basis the Kerala VDA is revised every month?

Ans : On the basis of revised CPI.