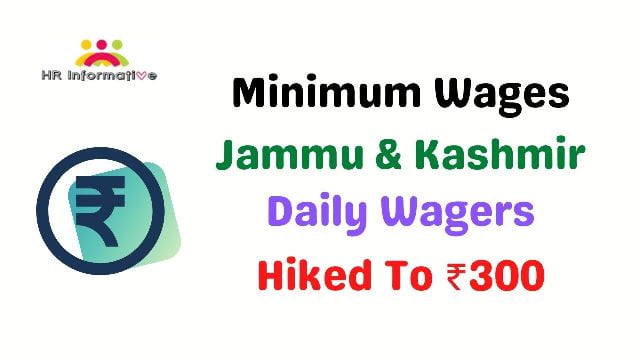 Minimum Wages in Jammu and Kashmir of Daily Wagers have been increased. Lieutenant Governor of Jammu and Kashmir Mr. Manoj Sinha has announced this on Saturday i.e. 24-April-2022. He mentioned that this was an interim measure till the minimum wage rates are revised by the Labour and Employment Department.

According to this Minimum Wages in Jammu and Kashmir of Daily Wagers including Casual Labourers in all government departments have been increased from Rs. 225 to Rs. 300 per day.

“Daily wagers are playing a significant role in the development of Union Territory with exemplary commitment and dedication to work. The interim measure has been taken to benefit a sizable portion of the workforce. We are firmly committed to ensure the welfare and well-being of all daily wagers and the government will leave no stone unturned to establish principles of equality, welfare, and social justice in the governance,” the Lieutenant Governor said.

“While we are fast-tracking the process on minimum wages, the interim measure reflects the UT administration’s concern to make growth and progress inclusive. Together we can confront the challenges of future and there is no doubt that daily wagers and casual labourers will also carry forward the process of social and economic change,” he added.

As the process of notifying the minimum wages by the Labour and Employment Department will take at least three months, a decision for interim measures was taken to benefit daily wagers in all government departments and those of municipalities and local bodies, officials said.